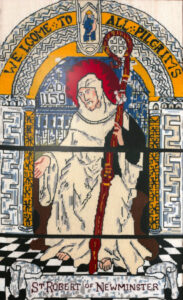 We are indebted to George B Thornton whose research has informed this summary of the history of our patron saint.

Born in the village of Gargrave,  North Yorkshire, Robert studied at the University of Paris, where he is said to have composed a commentary on the Psalms. After ordination he returned to serve in his hometown as rector.   Unfulfilled by parish life, he joined the Benedictines at Whitby but, finding that life too ‘easy’, in the winter of 1132  joined a band of monks from York to help establish a new Cistercian monastery.

The monks struggled in poverty, living in makeshift structures on the banks of the River Skell.  Committed to holiness, austerity, and dedication to the strict Benedictine rule, their reputation attracted a new novice, Hugh, Dean of York, who gave all his wealth to the community, enabling the building of more substantial facilities.  The monastery became known as Fountains Abbey.

In 1137 Ranulf de Merlay invited the monks of Fountains to establish an abbey at near his castle at Morpeth, Northumberland.   Robert was chosen to lead the monks there to found the first daughter house of Fountains Abbey.   Setting out in December 1137, they visited the Bishop of Durham for his blessing before staying with the de Merlay family in their castle at Christmas . On 6 January 1138, the feast of the Epiphany, they moved into the new abbey buildings in the deep wooded Vale of Wansbeck.  Robert was consecrated as the first Abbot of Newminster by Geoffrey, Bishop of Durham,

There were many challenges to face. Within a few months the wooden abbey structures were burned down by a Scottish army, so new stone structures were begun by local builders, encouraged by Robert’s offer of indulgences.   The work to complete the new abbey continued until 1180, long after Robert’s death.

Under Robert’s energetic leadership Newminster became one of the largest Cistercian abbeys in the north of England, endowed with lands extending to the Scottish border.

During this time three colonies of monks were sent from Newminster to establish further daughter houses.  The first was at Pipewell in Northamptonshire in 1143, at the invitation of William Butevilain.  In 1147 two new abbeys were founded, one at the invitation of William de Percy at Sawley, Lancashire, and one at Roche, near Doncaster,  founded by Richard de Busli, Lord of Maltby, and Richard FitzTurgis, Lord of Hooten.

Robert was described as a devout, prayerful, and gentle man. Known for being merciful in his judgment of others, and a warm and considerate companion, he was also very zealous toward his own vows of poverty.

The Cistercian monks had a rigorous fasting regime. Robert was particularly austere.  It is said that during a Passiontide fasting he became so weak that his attendant monk, fearing for Robert’s life, offered him a buttered oatcake.  Robert ordered that it be given to the first poor man at the gate.

Unstinting in the time he devoted to prayer and meditation, Robert was occasionally credited with prophetic visions.  During a Mass he became aware that a boat sent out by the abbey had been lost with all hands.  He ordered two monks: “go at once to Whitby, and you will find the bodies on the shore under the cliff, give them due ecclesiastical burial”.  They did so and subsequently reported the truth of the vision.

Gossip prospered then as it does now.  Lord and Lady de Merlay, inspired by Robert’s fasting, also fasted strictly.  Robert’s frequent visits to encourage Lady de Merlay’s spirituality led to gossip and an accusation of misconduct was brought against him by his own monks:  Robert went abroad to Clairvaux to defend himself before his ‘Father Immediate’, St. Bernard.   St Bernard did not doubt Robert’s innocence, since he had received a heavenly sign of his virtuous conduct. They became good friends, and Bernard gave Robert his belt, a symbol of chastity as a token of his confidence in Robert’s innocence.

Some doubt has been cast upon the truth of this story, which may have motivated by a desire to associate Robert personally with St Bernard, the foremost of the Cistercians.

In 1159 on Ascension Day,  Robert was stricken by a fever, and after receiving the Viaticum, he commended his brothers to God’s Care, and died.   St Godric, a hermit in Weardale and a close spiritual friend to Robert, is said to have seen a vision of Robert’s soul, like a ball of fire, being lifted by angels on a pathway of light toward the gates of heaven. As they approached, Godric heard a voice saying, “Enter now my friends.”

Abbot Robert was buried in the Abbey at Newminster, and miracles were reported at his tomb. In one instance, a monk is said to have fallen unhurt from a ladder while working on one of the buildings.  His tomb became a centre for pilgrimage and in 1656 the cult of Saint Robert was approved by the Cistercian Order. His Feast Day is 7th June.

Newminster Abbey was one of the first to be dissolved during the reign of Henry VIII.  The stonework was removed for reuse by subsequent landowners, but the outline of the Abbey is still visible and some cloister arches have been restored.  St Robert’s remains are probably still buried on the site. 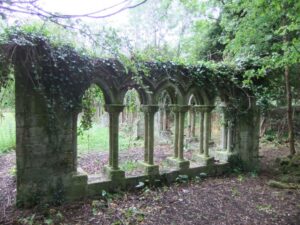